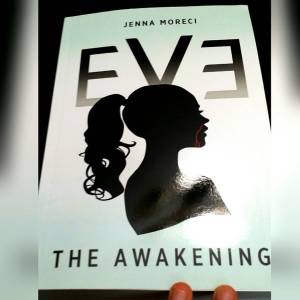 I discovered Jenna Moreci while browsing for writing tips on YouTube. She’s snarky, funny, and intelligent when it comes to knowing what makes a good story. Naturally, it was only a matter of time before I ordered a copy of her debut novel Eve The Awakening. My copy is autographed! 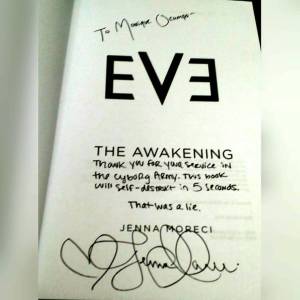 So what is this novel about?

In the distant future, humanity has discovered a type of mutant that they call “chimeras” or “chimes” (pronounced kime, rhymes with lime). Evelyn Kingston was a girl whose chimera powers manifested after her parents died in a traffic accident. Over a decade later, the world is now dealing with Interlopers who are hunting chimeras and causing destruction for reasons unknown. Wanting to get away from it all, Evelyn goes to college at Billington University. Of course, not everything there is what it seems to be.

I love this novel. It’s not perfect, but the good outweighs the bad.

First of all, I love the world they live in. It feels like something out of the Marvel comics, with chimeras being Moreci’s version of the X-Men. Even as Eve adjusts to life in college, there is always a tension lurking under the surface and by the time I got to the last few chapters, my nails were bitten down to the quick. Chimeras, based on what Eve has shown, are powerful, but not invincible and the Interlopers are equally intimidating, but thankfully not overly powered. Even though I know Jenna hates setting up places, I could easily imagine Billington and all the other places Eve went to, as well as all the fight scenes.

Most of the characters are compelling as well, especially Eve and Jason. I understood Eve as this skeptical loner who emerges into this new role of being a leader against the Interlopers. Jason is equally endearing because he’s sweet and considerate and the best guy to have fighting by your side. The romance that develops between them is genuine and thankfully undeterred by love triangles and stupid misunderstandings.

The supporting characters are definitely unique, with their own distinctive voices and plenty of diversity. My favorite side character is Sancho, btw. Filipino firecracker.

The entire story had me hooked from beginning to end. There are seriously no “filler” scenes. In fact, in spite of the fact that the book is over 500 pages long, I was left wanting more. The story is driven by both character and plot and the underlying tension, as well as the wonderful relationship that Eve and Jason have are basically the fuel that drives it.

Now I said before that this novel isn’t perfect. There’s no explanation for why exactly chimeras are considered the scum of the earth and the reason why Billington is set up doesn’t make a lot of sense, either, especially considering the people they hire to be their teachers. If the founders were pro-chimera, why hire people who are anti-chimera and accept students with anti-chimera views?

Eve initially checks off a lot of boxes on the Mary Sue Litmus test: meaningful name, gets special treatment,  is described while she looks at herself in the mirror (even though this novel is written in third person), and doesn’t get along with other girls. Aside from Eve, most of the female characters are two-dimensional. They all start out hating Eve or being fake. Madison especially didn’t make sense to me. What exactly were her motivations in this story? I knew her purpose to the plot, but her motivations were all over the place.

Regardless of the flaws, I still recommend Eve The Awakening to fans of sci-fi and comic books, especially if they are fans of X-Men, Buffy, or Agents of SHIELD because there are a lot of elements of all three things here. I especially like how Jenna wrote out the third act of the novel. She was able to play around with a very familiar movie trope and still have you going “That sneaky *bleep*!”

If you are a writer, check out Jenna Moreci’s channel on YouTube. If you’re interested in the book, click the link here to get it on Amazon.